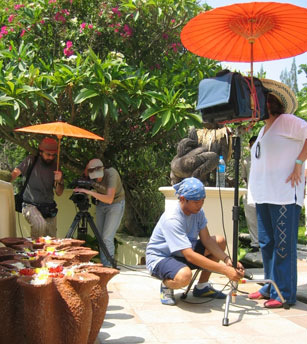 My film crew and I spent hours, on a day where the temperature soared to over 42 degrees centigrade, looking for the perfect shots to be used as B-roll in a documentary film on the Buddhists.  B-roll are usually general views shots that work well with more general narration, that is they are not specific to any one thing in the story. The shots were supposed to represent the birth of Buddha in his father’s palace in Nepal.  Since the budget did not stretch to filming in Nepal (only India and Thailand) I had to find a location that could work behind the story of the Buddha’s birth and the sumptuousness of his early life in his father’s kingdom.   After four hours of looking we spotted a Four Seasons Hotel nestled discreetly off the beaten path and as soon as we entered we realised that we found the birth place of Buddha.  Well at least for the purposes of our film.

The Buddhists is part of the World Religions Series for Al Jazeera Documentary Channel.  Written and directed by Mouna Mounayer.